On the Road Again (Fieldwork) 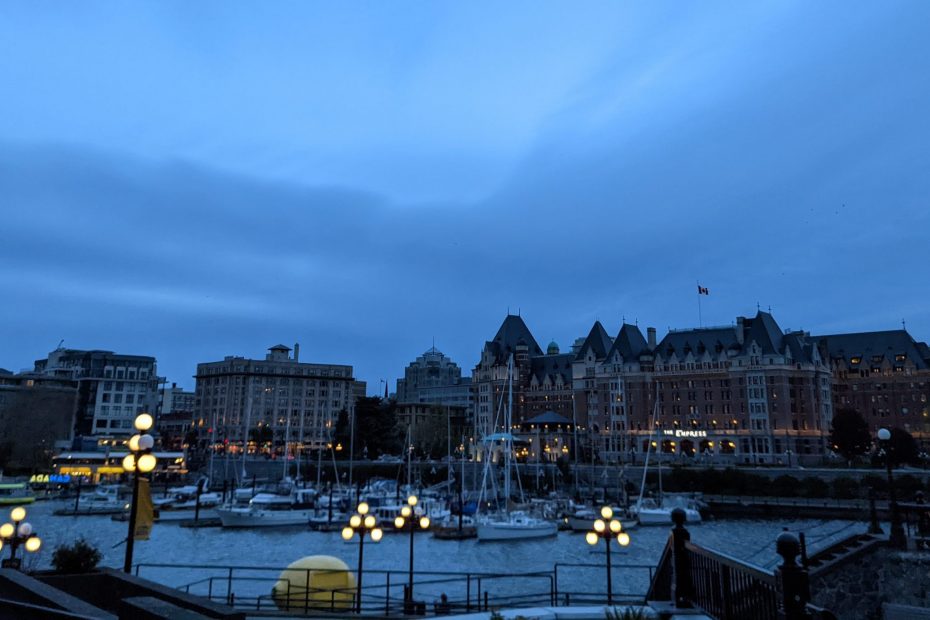 Like many of you, I have not done much traveling in the past two years. I settled into the “new normal” of cancelled plans and future travel credits. The four-and-a-half-hour road trip between Ottawa and Toronto was the most action my suitcase had seen in months. After my trip to New York City to speak at the American Association of Geographers Annual Meeting was cancelled in February 2022, I did not allow myself to get my hopes up about the impending research trip to Victoria, BC. Plus, in March I came down with COVID-19 and with little more than a month before I was set to leave things were not looking good. Next thing I knew it was April—exam season. I was up to my eyes with assignments, group projects, and deadlines, however, all I could think about was Victoria. We had started participant recruitment and at first the responses were slow to come in, mentally I began to prepare myself for yet another postponed trip. Mid-April came and with it a wave of eager participants, it was finally confirmed I would be going to Victoria.

The objective of the trip was to conduct three focus groups with participants to discuss the photos they had taken having partaken in a photovoice process for the Aging Playfully project. For background, photovoice is a participatory research method in which participants document their reality visually by capturing images surrounding a particular theme. In the case of our research study, the theme was play, and participants were tasked with capturing photos of environments that either encourage them or limit their ability to play. Therefore, the focus groups that were to take place in-person in Victoria, were designed to allow the participants the opportunity to share and discuss the meanings behind their photos. Prior to the trip I was constantly checking my inbox to see if I had received participant photographs, as I had no pre-conceived notion as to what they may capture.

April 30th, the night before I left, I was eagerly printing off flight documents while my partner condemned me for not using the airline’s app. I was ready, with a suitcase and backpack full of printed paper, I boarded my first flight since 2020. After two surprisingly short flights, I had arrived. And although I had been to British Columbia before, I was taken aback by how beautiful and lush it was. Seeing it in person I understood why so many people retired in Victoria, as it has a temperate climate, natural beauty, and variety of outdoor activities.

After a long night’s sleep, I was excited to spend the day exploring Victoria. It was important for me to get a sense of the city before I would hear about it from the participants. One of the places that I had heard about prior to my arrival was Clover Point Park. It consisted of a small peninsula jutting into the ocean, with benches, picnic tables, and walkways leading to and from the park. From what I observed it was a popular spot for dog walkers (I have white pants with muddy paw prints that can attest to this). The story of Clover Point Park had preceded itself; it had recently undergone a redevelopment that had apparently caused controversy in the community. I, of course, could not resist a bit of planning drama so I made it a priority to investigate the site. From what I heard, prior to the redevelopment of the park, cars could drive almost to the edge of the point, and there was ample parking throughout the site. The locals informed me that it was a popular spot for storm watching, and the parking lot made it accessible to those who could not walk the distance to the point. However, the recent redevelopment had taken a pedestrian friendly approach to the site by limiting parking and putting street furniture over the former lots, as well as creating a continuous foot and bike path. Once I arrived at the site it was clear that vehicles no longer had direct access to the waterfront, and I understood why the issue had divided the community. However, had this redevelopment made the site more playful of a place? As I stood at the end of the point pondering this, I began to feel excited for the discussions that would take place over the next two days.

After checking the forecast and seeing nothing but rain, the decision was made to move the focus group discussions from a local park to indoor facilities. The first was to take place in an old schoolhouse that had been converted into a community hub, I could not help but be charmed by the space. I set up the table and chairs and laid out each participant’s photos from the photovoice exercise as they began to enter in. What struck me most after the first focus group was of how different my interpretation of the photos was in comparison to the participant interpretation. I had employed Tsang’s (2020) method of photovoice analysis, which required that the researcher first interpret the photos prior to the photovoice discussion, and I quickly learned why the method was set up in this manner. Photos that I had thought would be symbolic of one theme, turned out to have a completely different meaning. I was thoroughly impressed by the participants dedication to the study. I left the community centre, excited and a bit nervous for the next day’s focus groups—what would tomorrows discussions bring?

The last day of focus groups were held at City Hall in downtown Victoria. The City had generously loaned us a room for the day in which to hold the discussions. While these focus groups were slightly larger than the first, the discussions were just as lively, and I appreciated the diverse perspectives that were present at the table. Some participants had lived in Victoria for less than a year, while others had lived there their whole lives. Regardless, everyone eagerly shared their stories behind the glossy photographs. As I cleaned up the room after the final group, I could not believe that data collection was over. After months of preparation and uncertainty it was incredibly fulfilling and satisfying that for the first time in a long time everything had gone as planned. The entire process had given me a newfound appreciation for academic research and the dedication of academics who undertake it. Coordinating the trip had not been easy, however, it had taught me to be adaptable in my planning—to be prepared for the unexpected.

I collected my things from city hall and headed south, I wanted to take one last walk through Beacon Hill Park before heading back home. Wandering through downtown I stumbled across a ping pong table in the street. No, it was not someone’s moving day, but rather a piece of street furniture—intentionally placed to promote play. Although minutes ago, I had been commending myself for my adaptability and preparedness, I took the table as a reminder to sometimes embrace the unexpected and spontaneous. As I took out my phone to take a picture, I realized that all along I had been participating in my own personal photovoice exercise—capturing images of the built environment that made me feel playful.

On the plane ride home me and my partner began sorting through images we had captured throughout the trip. I found that we had remembered the places we had gone differently, while some places spoke to him, I found that others resonated more to me. I had felt playful in nature or intimate street spaces, while he had been drawn to environments with a large structural landmark. Through this I was reminded of how our physical environment, individual characteristics, and social preferences all play a role in shaping what play means to us.

Although I will be working on another project this summer, I look forward to revisiting the photos in the fall. Until then, I will be practicing my ping pong skills for my next trip to Victoria.